Happy Sunday TV fans!  After watching Showtime’s The Affair season 5 episode 3, I realized that sometimes it takes “an enormous fall from grace” in order for someone to come full circle.  But what if you can’t see this redemption for yourself?  Does that mean that it is incomplete or is it possible that you went right back to where you started without learning anything?  Please note spoilers are ahead if you have not gotten a chance to watch the latest episode yet.

In tonight’s episode, “503,” it seems like Noah is on a new path, but his obsession over Helen continues to cloud his better judgment.  Meanwhile, Helen grows closer to Sasha and Joanie meets a stranger, revealing some darkness within her.  My top 5 moments from The Affair season 5 episode 3 are:

“You remind me of your mother…”

Part one of the episode follows Noah and we witness him having dinner with his daughter, Whitney.  Whitney seems stressed and beyond exhausted, but Noah is concerned that perhaps she is jumping into a wedding with Colin a little bit too quickly, especially since his green card depends on it.  Noah knows that his daughter will not listen to him, hoping to convince Helen to talk some sense into her, but I’m interested to find out more about Whitney’s story.

Whitney has been on and off the show so I’m hoping to see some character growth and development for her, but I’m worried about whether or not Colin has true feelings for her.  I’m also wondering if Noah will finally be able to repair the damage between them or if he will always feel like an outsider to his own family?

“How’s that working out?”

During Noah’s part of the episode, he receives a call from Janelle.  We learn that Janelle never returned his phone calls after Vic’s funeral and that they haven’t spoken in three months.  Noah agrees to meet Janelle in person so she can explain things and he discovers that she is running for the school board and is back together with Carl.

Janelle wants to make sure that Noah will keep things quiet about their past relationship since it could damage her campaign and I’m wondering if we will see more of this developed.  I’m not surprised that things didn’t work out between Noah and Janelle, but I also want to keep her relevant on the show so some secrets may have to be leaked in order for this happen.

“You are one sick bitch…”

Part three of the episode follows Joanie and once again, we only get a few minutes to follow her, which is starting to irritate me slightly.  I’m really hoping that these little bits and pieces will lead to a much bigger part of the puzzle because I feel like Joanie deserves a lot more screen time, but I am trusting in executive producer, Sarah Treem to seamlessly connect everything in a satisfying way.  I guess that just goes to show that I am very invested in Joanie’s character and I want to know more!

Joanie sits at a bar in Montauk and lies about having children to the bartender, asking him if she looks like someone who would have kids.  The two go back to Cole’s old house and have rough sex, as Joanie proceeds to slap the stranger in order to feel something.

There is clearly darkness and some kind of void inside of Joanie, but I’m worried about this dark path that she is headed on.  I’m really hoping that discovering the truth behind Alison’s death will give her some kind of peace of mind because it looks like she is beyond damaged and I want so much more for Alison and Cole’s daughter.

In the beginning of the episode, Noah is doing an interview for Vanity Fair and the journalist asks him, “Would you say that the redemption of Noah Solloway is complete?”  Noah is unable to answer this, proving once again that perhaps Noah doesn’t have a clue about who he really is or who he is meant to be.

Later in the episode, Noah becomes obsessed when watching Helen and Sasha, reminding me of the crazy Noah we saw in season 3 after he was in prison.  I didn’t like this Noah and I don’t want to see him return, but I think that Sasha was on to something.  Sasha tells Noah that he can’t see himself and that’s why he doesn’t understand his character.  But I have to wonder if Noah will ever be able to truly see himself or if he will forever be trapped in the past, wallowing in self-pity, unable to ever be satisfied?

“You don’t have to set yourself on fire to keep other people warm.”

Sasha has some pretty great lines in this episode and I think that he may be the unlikely voice of reason for both Noah and Helen.  However, I still don’t completely trust him.  Helen and Sasha’s relationship has advanced to the next level, but is Helen truly ready to move on?  Helen has a lot to deal with, including the news of her father’s declining health and allowing Sierra and baby Eddie to stay under her roof.  Sasha reminds Helen that she can say no, but it seems like Helen may be using Sasha as an escape.

I honestly just want Helen to find some kind of happiness, but I’m not sure that Sasha is her knight in shining armor.  Perhaps Helen doesn’t need a boyfriend anymore as she mentioned to her son earlier.  I just think she needs to truly love and appreciate herself, but it will be interesting to see what happens next now that Sasha has gained more of her trust.

The Affair still has me hooked and I can’t wait to find out more!  Stay tuned!

I hope you enjoyed the list and feel free to post your own theories and thoughts on The Affair below in the comments section.  Thanks so much for reading and happy viewing!

Have a performance on TV that you think is simply outstanding? Feel free to contact me with your nomination for the week by Friday at midnight!

**Do you love television shows like Buffy the Vampire Slayer, Angel, Once Upon a Time, Lost, Charmed, The Vampire Diaries, and Supernatural?  Do you enjoy dark fantasy, fairy-tale retellings, paranormal romance, horror, and mystery?  Then you may like my book series, Dreaming of Wonderland…available on Amazon!  Thank you for taking the time to check it out and I appreciate any feedback as well.  I really hope you enjoy!

The Dreaming of Wonderland Book Series is available here! 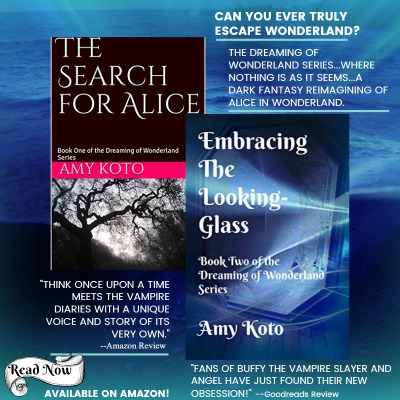