Happy Wednesday TV Fans!  For today, I have returned to one of my old favorites, Angel, as I am currently on the last season of my re-watch.  I have such an appreciation for this spin-off series of Buffy, as it really was not afraid to dive deeper into the darkness that exists all around us.  Angel Investigations had a mission to “help the helpless” and they did run into their fair share of villains along the way.  However, they faced some demons they never saw coming, some evil foes from their past, and even villains among each other.

These villains became worthy opponents who continued to threaten our beloved characters and the world.  Each villain was unique and terrifying in their own way, but they continuously challenged Angel.  Whether they used the law and corruption to further their agenda or just smashed everything in sight, they deserve a spot in my top 5.  Please note spoilers are ahead if you have not gotten a chance to watch the series yet. My top 5 villains from Angel are: 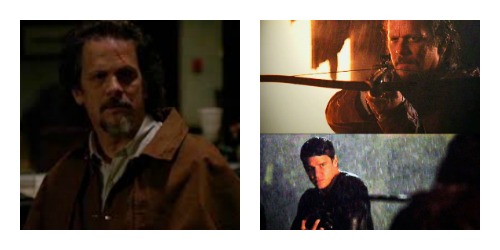 Daniel Holtz is a vampire hunter from Angel’s past and he made a deal with a demon named Sahjan so that he could get his revenge on Angel and Darla.  Holtz is the main villain in season 3 and returns from a state of suspended animation to take out “Angelus” once and for all.  Holtz learns that the vampire he knew from long ago is now with a soul, but he still wants to make him suffer.  Angelus killed Holtz’s family and Holtz wants to even the score.

He is a formidable villain because he successfully takes away the one thing that Angel truly cares about.  He doesn’t kill Angel’s son, but he abducts him and takes him to another dimension with the help of Wesley’s betrayal.  Angel’s son, Connor, ends up growing up in another dimension and is raised by Holtz.  Holtz continues to manipulate this love and even has his right hand partner in crime, Justine, kill him so it looks like Angel did it.

Holtz wants to ensure that Angel’s son will hate him for the rest of time, which is a revenge that would hurt Angel more than any other type of torture thrown his way.  Holtz was contemplative in his plan and truly impacted Angel, proving to be a villain worthy of my top 5 for sure. 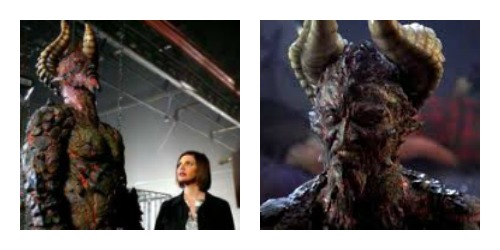 The Beast is a nearly unstoppable demon that emerges in season 4.  When Cordelia returns to earth, she has visions about this particular demon, which seems to be connected to Connor somehow.  The Beast is very powerful and Angel has a tough time fighting him.  The Beast begins killing members of the “Ra-Tet” to successfully banish the sun.  The Beast is all about destruction, but we eventually learn that his strings are being pulled by Jasmine, who has taken over Cordelia’s body.

Even though The Beast is not a master manipulator, he is powerful enough to hurt everyone in his path, including Faith, who tries to help bring back Angel once he is turned into Angelus.  The Beast was a villain made for nightmares and he definitely gave me some during my re-watch and he may have been Angel’s toughest opponent when it comes to combat. 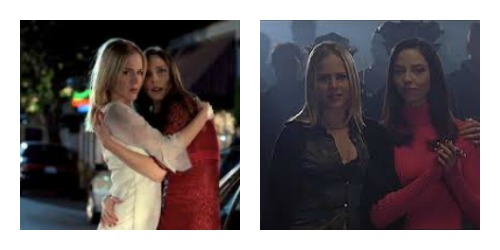 The delicious and dark duo that wreaked havoc in season 2 absolutely deserve a spot on my list.  By themselves, Darla and Drusilla prove to be dangerous, but as a tag team they are truly masterful.  After Darla is brought back as a human in season 2, Wolfram & Hart recruit Drusilla to turn her into a vampire.

These two bad-ass ladies just want to have fun, as they even go on a shopping spree that is to die for…literally.  Angel has close ties to both of them from his past, which makes them formidable foes.  My favorite episode with them is “Reunion,” (Season 2, episode 10), where they decide to turn the tables on Wolfram & Hart and deliver a “massacre” just like they ordered.  Only the massacre is on the lawyers, as they kill everyone at the party except for Lindsey and Lilah.

They even spark a darkness within Angel, as he allows Darla and Drusilla to kill everyone at the party.  He is not Angelus in this moment, but something else, as his past consumes him and he almost turns off his humanity here, which proves just how dangerous this duo was. 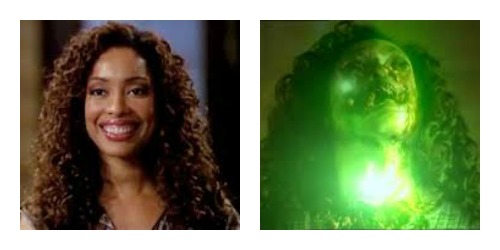 After fans were initially shocked that Cordelia could be the potential big bad in Season 4, we learn that Jasmine has been controlling her and pulling the strings.  Cordelia ends up giving birth to Jasmine, which puts her into a coma, and the goddess is released into the world.  You would think that Jasmine would be all about destruction, but her methods are different, as she creates a world of “shiny happy people.”  You know she was evil when she got Angel to wear yellow.

Everyone is enamored by Jasmine, as they flock to her and will do anything to make her happy, which is beyond dangerous.  Later on, Fred is exposed to Jasmine’s blood and sees the true face of Jasmine, which consists of maggots and rotting flesh.  Thanks to Fred, everyone else is eventually able to see what Jasmine truly is and we learn that she consumes large groups of people at a time to maintain her strength.  So, basically she eats people, but in a happy, cheery way.

Jasmine is a worthy villain because she was able to successfully infiltrate Angel’s group and use Cordelia to be reborn into the world.  She was also a villain that Angel could not just merely fight and attack, as her manipulation of the world was something transcendent of violence, but luckily we had our girl Fred there to make a difference.

Some honorable mentions before revealing my number one pick are:

It should be no surprise that my favorite villain has to go to “Wolfram & Hart.”  I decided to keep them as a collective, rather than break them up individually, because that was the point of this evil law firm.  While Buffy had to fight endless demons, gods, and vampires, Angel had to deal with evil lawyers who were not afraid to cut through red tape to further their agenda.  My standout lawyers from Wolfram & Hart were Lindsey and Lilah, but the entire concept of an evil law firm was pure genius.

The lawyers of Wolfram & Hart successfully use manipulation and corruption, which is not something Angel can just easily fight or attack.  They actually helped Angel become an even stronger hero, as he needed to think outside the box to outsmart them again and again.  In season 5, Angel is presented with the opportunity to lead the Wolfram & Hart branch in LA, which was a shock to many viewers.  Even though Angel tries to do good with the resources he now has readily available, there are still consequences and threats thrown his way.

The ultimate last apocalypse of the series is unleashed from Wolfram & Hart, which reminded us that they were the very source of the evil walking the earth.  Whether you love them or hate them, you have to respect the unique methods of Wolfram & Hart, as this law firm absolutely earns my top spot today.

I hope you enjoyed the list and feel free to share some of your own thoughts and comments on your favorite villains from Angel. Thanks so much for reading and happy viewing! 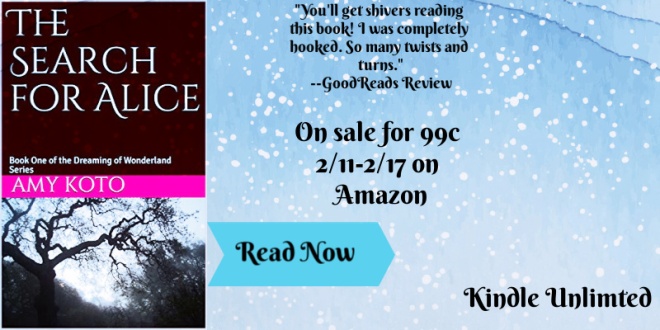 As you may know, February is “Women in Horror” month. To celebrate, PromoteHorror.com asked women from different professions if they would like to answer some questions about being a “Woman in Horror,” and more. I am so excited that I was interviewed for this and I hope that everyone continues to celebrate and support women in horror all year round! Check out my Women in Horror month Interview at Women in Horror Month Interview with Author/Blogger Amy Koto