Happy Tuesday TV fans!  After watching Showtime’s The Affair season 5 episode 9, I wondered if Noah can truly be redeemed?  Can one really be erased from their own story or is there still a chance to make things right?  Please note spoilers are ahead if you have not gotten a chance to watch the latest episode yet.

In Sunday night’s episode, “509,” the story about Noah is leaked everywhere and it really takes a toll on the entire family.  Meanwhile, Helen makes a shocking discovery about Sasha and Whitney determines where her loyalties lie.  My top 5 moments from The Affair season 5 episode 9 are:

“Is she finding any skeletons?”

Part one of the episode follows Helen and we catch up with her right after Petra has called her.  Helen is shocked by what she is hearing, but Noah continues to lie, telling her that everything is fine.  Once the story is released, Helen immediately knows something is up when everyone begins to stare at her while dropping off her kids at school.

Helen calls Noah and demands that he read the story out loud to her, which includes excessive details about a number of cases where Noah has been accused of mistreating women.  Noah looks to Helen, asking her what to do, but he is not the only one who is suffering from the release of this story, as Helen is fired from her job before even starting because of the bad publicity.

Even though the Solloway family is dealing with a lot right now, Noah turns to Helen and tells her what a great mother she is.  Over the seasons, Noah has constantly placed the blame on someone else.  In this moment; however, he takes a second to reflect on the amazing mother of his children who he has wronged, and yet somehow still stands by him when it comes down to the moments that truly matter.

While I don’t think that Noah deserves a second chance with Helen, I thought this was an important moment worth mentioning.

“Do you have any idea what you have done?”

To make things even more dramatic, a fire is spreading across California and Helen evacuates in Sasha’s helicopter after finding out that he picked up her kids.  Helen is initially annoyed that he didn’t say anything, but realizes that he was just trying to help.  However, Helen’s phone continues to blow up and after she makes a statement, only part of her actual statement is used on television, which doesn’t present it in the best light.

Helen is horrified that her children have to witness this, but everything starts to add up when she realizes that Sasha is the one who gave Petra Eden’s name in the first place.  Helen suddenly realizes that Sasha is behind all of this because he wanted writing credits on the movie.  Sasha tries to reason with Helen, but she takes her kids out of there, realizing Sasha’s ulterior motives here.

“I just wanted to say hi to the woman who’s ruining my family’s life.”

Part two of the episode is from Whitney’s perspective.  Her phone also starts blowing up when the story about her father is released.  Even though Whitney receives calls and texts from Colin, she decides to call Furkat instead for a shoulder to cry on.  After realizing her mistake when Furkat mistreats her, Whitney gets on the same plane as Audrey Nelson, who is one of the women accusing her father.

Whitney decides to sit right next to her to get some answers and I was really proud of her in this moment.  In the earlier seasons of the series, Whitney was sometimes presented in a selfish and materialistic light, but she has grown so much and has experienced her own misfortune, suddenly realizing that perhaps it really is about the power rather than the man, understanding where Audrey and the other women are coming from all too well.

“Why are you still defending him?”

Later in the episode, Whitney comes clean with Colin and he still continues to be there for her, reminding her that she is worthy and special.  This reunion is interrupted; however, when both Noah and Helen show up at Whitney’s place to come up with a plan.  Helen claims that this is all her fault because of Sasha, but Whitney asks her why she is still defending her father?

Whitney explains that part of the reason why she entered into previous destructive relationships was because of what her father did to her mother and she reminds her father that she has seen how he truly looks at women, “like they’re prey.”  Whitney’s awkward encounter with her father in the hot tub comes back up, which is something that Helen was not aware of.

I thought it was important for Whitney to speak her mind here so that Noah can finally see things from another perspective.  Maybe he isn’t completely guilty or innocent, but I am really wondering at this point if his story will lead him to an ultimate redemption or to a darker path of destruction?  Stay tuned!

I hope you enjoyed the list and feel free to post your own theories and thoughts on The Affair below in the comments section.  Thanks so much for reading and happy viewing!

**Do you love television shows like Buffy the Vampire Slayer, Angel, Once Upon a Time, Lost, Charmed, The Vampire Diaries, and Supernatural?  Do you enjoy dark fantasy, fairy-tale retellings, paranormal romance, horror, and mystery?  Then you may like my book series, Dreaming of Wonderland…available on Amazon!  Thank you for taking the time to check it out and I appreciate any feedback as well.  I really hope you enjoy!

The Dreaming of Wonderland Book Series is available here! 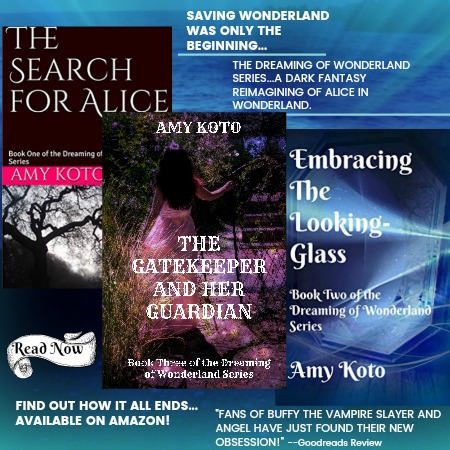